The Ruins of Corregidor

In one of my trips to Manila, my friends and I decided to embark on yet another adventure, this time to the famous Corregidor.  We wanted to get acquainted with the island knowing it is a memorial for the valor and heroism of the Filipinos and Americans who defended the island against the invading Japanese forces during World War II.

Our memorable trip started at the CCP Complex Terminal in Roxas Boulevard where we took a ferry going to the island.  We traveled on calm waters for about an hour and a half before we finally reached the North Dock, Corregidor's main docking facility located at the Bottomside sector of the island.  I was filled with great anticipation of finally setting foot and seeing the very historic place.

Upon arrival, we were given our welcome drinks and had our lunch by the Bloodstone Beach.  The beach got its name because it is littered with red-speckled stones.  The buffet lunch, which is included in the tour package, was a delicious mix of Filipino and Continental food complete with fruits and salad as dessert.  Apparently the little glass of welcome drink was the only drink that went with the lunch, so we had to purchase our water and softdrinks.

With stomachs full, we climbed on our tramvia, one of the colorful Spanish-era style coaches which are the only transportation used for the guided tours. The tourists have an option of choosing from English-speaking, Filipino-speaking and Japanese-speaking guides.  Our group got lucky because our Filipino/English-speaking guide is not only very informative but also has a great sense of humor.  Throughout the tour, he would throw jokes, which made the tour a lot of fun.

TOPSIDE SECTOR
The island is divided into sectors with the Topside being the highest sector since it is elevated about 400 meters or so above sea level.  It is here where we found the ruins of the Mile-Long Barracks and the Cine Corregidor.  The Mile-Long Barracks is a three-storey concrete building where the headquarters of Gen. Douglas MacArthur was located.  It is also where the American officers and enlisted personnel detailed at the garrison were billeted.  It is known to be the world's longest military barracks and although it is only less than a third of a mile long, it is still referred to as the Mile-Long Barracks.  The Cine Corregidor used to be a movie theater that catered to the entertainment needs of the soldiers and their families.

Also found in this sector are the Spanish Flagpole, Eternal Flame of Freedom, Pacific War Memorial, and the Spanish Lighthouse.  The historic Spanish Flagpole is a mast from the Spanish warship captured by the fleet of Gen. George Dewey during the Battle of Manila Bay in 1898.  It is where the Filipino flag was finally hoisted during a very moving ceremony in 1947 when the Americans turned over Corregidor to the Republic of the Philippines.

The Eternal Flame of Freedom is a large red steel structure which was erected to commemorate the sacrifices, courage and heroism of the American and Filipino servicemen.

The Pacific War Memorial was built in honor of the many American and Filipino soldiers who served during the Pacific War.  Its major structure is a rotunda where a circular altar is located at its center.  Inscripted at the altar is this very poignant message: “Sleep my sons, your duty done, for Freedom's light has come; sleep in the silent depths of sea, or in your bed of hallowed sod, until you hear at dawn the low, clear reveille of God.”  It also has a museum where war regalia and memorabilia are on display.

The original Spanish Lighthouse was destroyed during the war, and the current one was constructed at exactly the same site.  The lighthouse is the highest point in the island being 628 meters above sea level. At the top, we were greeted by the breathtaking view of Corregidor and Manila Bay.

It is also here in the Topside where most batteries are located, the most popular of which are the Battery Way, named in honor of 2nd Lieutenant Henry N. Way; Battery Geary, which was named after Capt. Woodbridge Geary; Battery Crockett; Battery Hearn; and Battery Grubbs, named in honor of 1st Lieutenant Hayden Y. Grubbs.  All of these servicemen the batteries were named after died in the country during World War II. 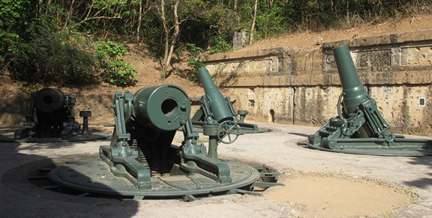 MIDDLESIDE SECTOR
The ruins of the Middleside Barracks and Army Hospital are located here.  The Middleside Barracks are two three-storey buildings where personnel of the 60th Coast Artillery Regiment, 91st Philippine Scout Coast Artillery Regiment and the 4th Marine Regiment were billeted.  The Army Hospital was the only medical facility in the island and shaped like a cross when viewed from the air to make it easily distinguishable from the other buildings.

The Filipino-American Friendship Park is also located in the Middleside Sector of the island.  It was built to commemorate the friendship between the Americans and Filipinos who fought side by side against the Japanese forces.  The major structures in the park are the statues of an American and Filipino soldiers holding on to each other.

TAIL END SECTOR
We were able to visit the Filipino Heroes Memorial, which is one of the latest landmarks constructed in Corregidor.  It was built in honor of our Filipino forefathers who fought for our country's freedom and independence.  There are several murals that tell the stories of the many struggles the Filipino people underwent from the Battle of Mactan in 1521 to the People Power Revolution in 1986.

MALINTA TUNNEL
Malinta Tunnel was the island's bomb-proof storage and personnel shelter.  It also served as the headquarters of Gen. Douglas MacArthur and President Manuel Quezon who stayed there together with their families and countless Filipino and American soldiers during the worst bombarding from the Japanese forces.  One of the highlights of our tour was the Lights and Sound Show that dramatized the events that took place during the war.  After the show, we had a chance to see and take pictures of the ruins of the lateral tunnels, which gave us goosebumps.  It was quite an experience to actually be in the tunnel and envision what our forefathers endured. 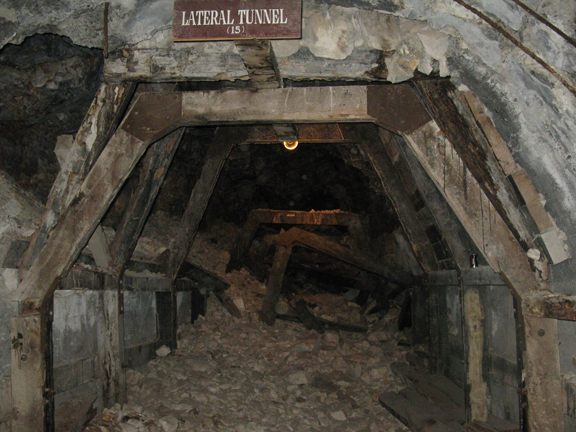 TOUR PACKAGES
Our group availed the Day Tour package which includes round trip ferry transfers, entrance fee, guided tour, buffet lunch with welcome drink.  We had to pay a separate fee for the Malinta Tunnel Light and Sound Show.  Kindly visit the Sun Cruises website at http://www.corregidorphilippines.com for different tour packages and rates. Sun Cruises operates the ferry service and tours in the island.
If you are a history buff, a relative of a war veteran, or simply a person who loves to travel and see places, Corregidor promises an unforgettable adventure.
Travel & Lifestyle