Nida Rooms Philippines, the first virtual hotel operator and hotel room consolidator in the country and a subsidiary of Global Rooms Limited (GRL), officially redefined the country’s hotel industry with the launching of its newest mobile application.

Nida Rooms’ mobile app allows customers to instantly see thousands of affordable hotel rooms at their preferred locations in major Philippine cities.  Never before has the consumer had such access to hotel inventory, pricing and location in one screen view on their smartphone. 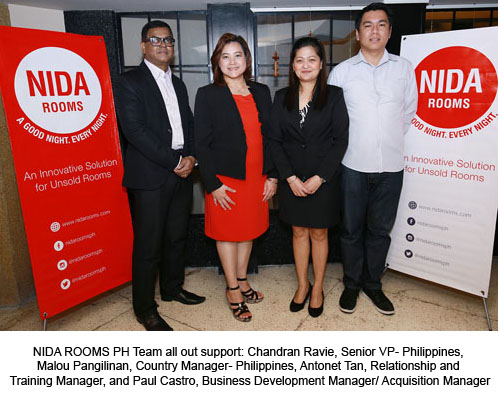 Country Manager, Malou Pangilinan said that SMEs will benefit a lot from the Nida Rooms business concept of providing convenient, consistent, comfortable, and affordable hotel experience for business travelers as well as local tourists in many locations nationwide.

“We have done the homework for our guests in that, we have pre-qualified and selected our hotel partners based on stringent quality standards that Nida Rooms upholds. We will have Nida Rooms everywhere you want to go in the Philippines,” Pangilinan added.

Nida Rooms’ partner hotels in the Philippines are now able to sell their rooms through a new “smartphone” mobile app distribution channel that is non-competitive with their traditional online travel agents (“OTAs”) or their walk-in customer business.

Furthermore, smaller boutique or economy hotels with no web presence or relationship with OTAs, are instantly able to access the smartphone consumer by joining the Nida Rooms network.
By pre-vetting hotels and working closely with hotel managers, Nida Rooms focuses on providing consistent, essential services for its customers in-line with its aim to provide “A Good Night. Every Night.”

Meanwhile, customers can book their rooms anytime, anywhere through the mobile app that can be downloaded now from Google Play Store while the mobile application for the Apple Store will be available shortly.

Their network of hotels in the Philippines is steadily growing. By the end of the first quarter of 2016, Nida Rooms will be available in most major cities in the country offering travelers consistent essential services anywhere, anytime.

Nida Rooms has over 50 partner hotels nationwide. Through its direct sales force of over 150 relationship managers and daily increasing hotel sign-ups, the company expects to reach over 1,500 partner hotels in the Philippines by 2Q 2016 giving it majority market share in the mid and economy hotel market segments in the country.