Eating is a Pleasure at Choobi Choobi

It is often said that the dining table is the place where the family best bond together, sharing stories and laughter over a delicious home-cooked meal. These days, eating as a family is not limited to the confines of the home as many dining places now abound in Iloilo City, the latest of which is Choobi Choobi at SM City Iloilo.

It recently held its grand opening last March 4, where celebrity endorser Erich Gonzales, along with owner Stan Tanchan and his family, warmly welcomed the media, bloggers and other special guests.

The event started with the cutting of the ribbon and a dedication ceremony officiated by Pastor Raffy Gonzaga. What followed was a short program outside the restaurant where Erich indulged her fans by eagerly taking part in the fun games.

For God’s Glory
“The reason why we put up this restaurant is not only for profit, but to show how God works through us. To put our company Mission and Vision in a nutshell, Choobi Choobi is a way to glorify God,” said Stan, who had businesses before that did not succeed.

“When I started with this new investment, I prayed hard for God’s guidance and he has blessed me and my family so much.” And how blessed he is as Choobi Choobi now has 20 branches nationwide with Iloilo City as their 15th store. 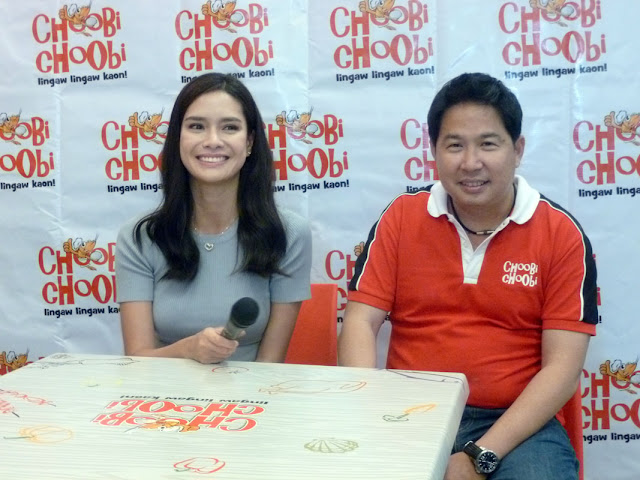 Erich said that the reason why she accepted this endorsement deal with the Tanchan family is because they are all Christians. “Aside from the good food, I believe in the Tanchan family and share their faith and mission in life. This restaurant is here to help people by giving them employment and to provide a wholesome place where family and friends can strengthen their bonds. At the end of the day, whatever we do is for God’s glory,” said Erich.

Lingaw Lingaw Kaon
Choobi Choobi is a Chinese (Fokkien) word that means “lingaw lingaw”. The name aptly describes one’s dining experience at the restaurant as its simple, but homey ambiance, warm and friendly staff, and great food promise an enjoyable and memorable time.

And we experienced this during the most delectable part of the grand opening - dinner. Served were the restaurant’s many bestsellers, which are typical Filipino dishes that Ilonggos enjoy the most. A glance at their menu revealed that the restaurant does not only specialize in seafood and grilled dishes, but serve Asian cuisine as well, all at affordable prices.

As Erich said, all the foods at Choobi Choobi are delicious, and based from what I have tasted so far, she was right.

Asked what Choobi Choobi dish best describes her, Erich has this to say: “It would be Cha Tao Miao because what you see is what you get. It is stir-fried snow pea sprouts, a simple, but very healthy vegetable dish.”

If you are planning to dine out with family or some friends, best to head over to the ground floor of SM City Iloilo Northwing where you will absolutely have a great time at Choobi Choobi.
Food & Dining