AirAsia Philippines CEO Captain Dexter Comendador said, “The addition of Manila – Iloilo route will further expand our domestic footprint in the Visayas region following our expansions in Cebu via the launch of international and domestic flights.” 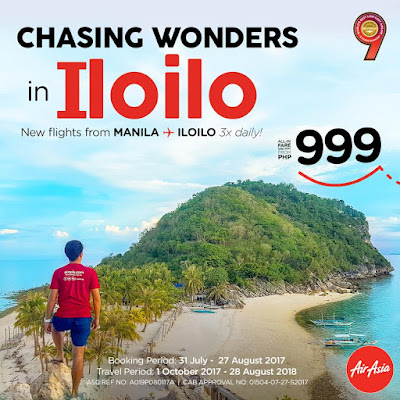 “AirAsia’s signature low fares, superb service and seamless connectivity here in the country and across ASEAN including China, Australia, India and much more will facilitate travel aspirations of our guests from Western Visayas via Iloilo’s modern airport and help stimulate demand for travel and tourism.”

To celebrate the new route, AirAsia is offering promo fares from as low as P999 now available for booking at www.airasia.com from today until August 27, 2017 for travel period between  October 1, 2017  to August 28, 2018.

AirAsia flights between Manila and Iloilo will operate using the airline’s fleet of Airbus A320s that can accommodate up to 180 passengers.

AirAsia has expanded its Cebu operations last year with direct flights to Taipei and Singapore launched in November and domestic flights from Cebu to Davao, Boracay and Palawan introduced in April this year.  The airline has been servicing flights for Cebu – Incheon/Seoul and Cebu – Kuala Lumpur, and operates several flights between Manila and Cebu since 2013.