ILOILO CITY – Around 2,000 students from at least 26 schools and universities in the province will get to watch for free the world-class performances of the renowned Manila Symphony Orchestra in a two-day concert to be held on August 25 and 26.

The two-day performance of the Manila Symphony Orchestra here marks a new milestone for artistic initiatives that will rebuild the image of Iloilo as a center for performing arts.

Established by Viennese conductor Alexander Lippay in 1926, MSO is one of the oldest orchestras in Asia and has been performing for decades as the country’s only professional symphony orchestra.

The two-day concert by the 55-piece world-class ensemble will be at the St. Anne Parish (Molo Church) on August 25 and at Iloilo Convention Center on August 26. They were invited by Ilonggo Sen. Franklin Drilon, the lead-player in the rapid developmental landscaping of the region, especially Iloilo. 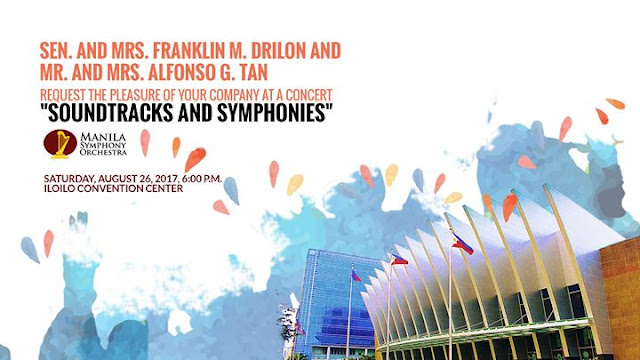 Drilon believes that Iloilo’s refurbished architectural panorama will help achieve the collective vision of Ilonggos “to revive the province’s glorious days of performing arts” as history shows that Iloilo’s theatre arts and music peaked in the late 1800’s.

He said that having the MSO in Iloilo is “meant to inspire a higher level of musicality” especially among the youth.

“It is our hope that these students who will be watching the MSO performance and the Ilonggo youth in general will be inspired to be more active in the field of performing arts,” Drilon said.

“Our capital asset is the impeccable creative talent pool of Ilonggos who underline the investment value of Iloilo. With these performances, we want to convey the message that arts and music flourish here because Ilonggos are better exposed through schools and similar learning environment,” Drilon stressed.

All free tickets to the concerts are already allocated to a crowd of 4,000 who will enjoy MSO’s renditions of “Sweet Symphonies: Bach vs. Beatles” at Molo Church and “Sound-tracks and Symphonies” at the Iloilo Convention Center.
Entertainment News & Events

If there’s one reward that Gigi De Lana would love to receive from all her hard work as the fastest-rising singer and musician today, it is certainly not something material.  “I’m very thankful for all the good things that have been happening to me lately, but that one thing that will make me be truly at my happiest is seeing my mom healthy and happy and live a longer life,” Gigi confided to the media in her online launch event as PLDT Home’s ambassador. “My mom is battling stage 4 breast cancer, and she has been my inspiration and motivation to pursue my dreams.” Gigi De Lana and Mommy Imelda From being the frontwoman of viral YouTube cover band The Gigi Vibes, Gigi, at 26, is fast becoming local entertainment's next big star. She recently released her self-titled debut album under Star Music and made her feature film debut as Love Mae in Four Sisters before the Wedding in 2020. Yet, Gigi considers being busy and swamped with work a blessing. She calls this career take-off the sta