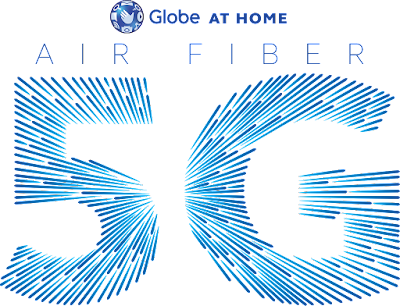 Globe President and CEO Ernest Cu revealed that the Globe At Home Air Fiber 5G will enable the company to connect more Filipinos at home given the external challenges of rolling out fiber optic cables in the country. “The arrival of 5G has caused excitement in the global world of telecommunications. Today, we made a crucial step in fulfilling our goal of connecting more Filipino homes, and our vision of bringing first-world Internet to the Philippines,” Cu added.

The Globe At Home Air Fiber 5G postpaid plans which offer fiber-like speeds up to 100Mbps and super-sized data packages of up to 2 terabytes will be initially available in select areas in Pasig, Cavite, and Bulacan.

Cu said that the Globe At Home Air Fiber 5G will reinforce the efforts of achieving the company’s goal to connect two million homes by 2020. “Prior to Air Fiber 5G, we have aggressively utilized fixed wireless solutions to connect more homes and businesses to the internet over airwaves.  This strategy resulted in home broadband subscriber base increasing by 55.1% to 1.7 million in the first three months of 2019 from 1.1 million in the same period in 2016,” Cu revealed.

“Globe At Home Air Fiber 5G makes use of fixed location wireless radios instead of fiber optic cables which enables the company to go over the circuitous approval process of deploying a fiber optic cable - a task which proves to be arduous and involves securing multiple permits from local government units (LGUs),” Cu said. “The right of process can sometimes take years to obtain, causing drastic delays in fiber optic roll-out completion,” he added.

Cu said that the company has been spending over 21% of its annual total revenues to upgrade and expand its telecommunication and IT infrastructure since 2012. “We have been ramping up our capital spend from P20.3 billion in 2012 to P43.3 billion in 2018, in order to provide our customers better broadband services,” he said.

5G technology enables the use of Internet of Things (IoT) for today’s intelligent homes. Internet connection that is faster, more secure and with lower latency brought by 5G significantly enhanced entertainment and security systems at home, promising a digital experience that is more seamless, reliable and intuitive for the modern Filipino household.
Tech