A call for Pinoys to consume only legal content online

The internet has become the main source of many copyright infringement content, impacting people and businesses involved in the production and distribution of legitimate materials and exposing consumers to malware and other cybersecurity threats.
The problem is further exacerbated by the pandemic as people are cooped up indoors and have to rely significantly on streaming or downloaded video, music, and games for entertainment.
The latest report released by YouGov for the Asia Video Industry Association’s Coalition Against Piracy (AVIA CAP) showed that 66% of online Filipino consumers admitted having accessed piracy streaming sites and torrent sites, the highest percentage among eight Southeast Asian countries included in the survey.
Moreover, the number of Filipino consumers who purchased illegal streaming devices (ISDs) or a TV box to access pirated video-on-demand content and premium TV channels without paying subscription fees,  has jumped to 34% percent from 28% a year earlier. Of the 34% of consumers who purchased an ISD , more than half or 59% stated that they had cancelled all or some of their subscription to legal pay TV services. 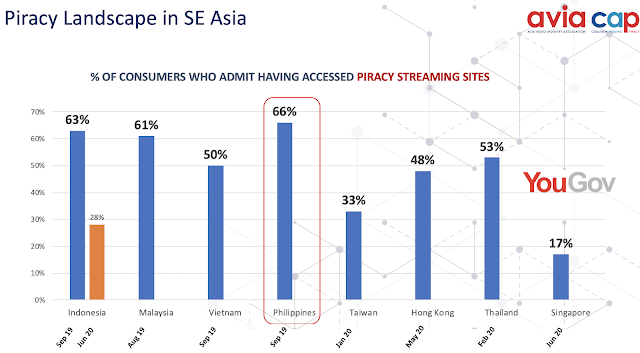 In addition to the short-term problem of cancelled subscriptions is a longer term problem – many of the people streaming pirated content are young. The survey found that 45% of 18-24 year-olds and 46% of 25-34 year olds used ISDs or other apps or services to view infringing entertainment content.
“In no uncertain terms, piracy is theft.  It puts the creative and film industry at risk.  It also puts the livelihood of people working in the industry at risk.  On top of these, piracy also puts data privacy and devices at risk because many unscrupulous persons use these sites to hack devices to obtain personal information.  For these reasons, we encourage our customers to watch content using legitimate sources only,” said Yoly Crisanto, Globe Chief Sustainability Officer and SVP for Corporate Communications.
In the ASEAN region, one of the known initiatives to help curb piracy is through site blocking.  Countries such as Singapore, Malaysia and Indonesia have been successfully doing this practice.  In the Philippines,  Senate Bill No. 497 entitled the ‘Philippine Online Infringement Act’ was filed by Senator Vicente Sotto III last year.  The pending bill proposes an administrative site blocking mechanism which would empower the authorities to ensure that Internet Service Providers take “reasonable steps to disable access to sites whenever these sites are reported to be infringing copyright or facilitating copyright infringement”.
Neil Gane, General Manager of AVIA CAP said, “Site blocking is a key tool in disrupting the availability of piracy websites and the illicit revenues that are generated by crime groups who operate these sites. An effective site blocking process is a win-win for all Filipinos, resulting in many consumers migrating back to reliable and safe legal services with quality content.”
He added:  “Content piracy is not a victimless crime and often it’s the users who become victims. Piracy is a hotbed for malware. Unfortunately, the appetite for free and accessing stolen content via piracy websites or illicit streaming devices blinkers some consumers from the real risks of malicious malware infection such as spyware.”
As the Philippines’ leading advocate against online piracy, Globe, through its #PlayItRight campaign, continuously sends a strong message to the public to consume digital content the right way.  #PlayItRight is aligned with the UN Sustainable Development Goals that Globe is supporting, namely:  UNSDG No. 8 - decent work and economic growth, No. 9 - industry, innovation, and infrastructure, and No. 17 - partnerships.
To protect the intellectual property rights of the company's own original content as well as the licensed content of its global and local partners, Globe makes it easy for its customers to access premium content using direct carrier billing.  It is a mobile payment option that allows Globe mobile customers to download and purchase digital content like games, movies, music, eBooks, apps, among others from Google Play Store and charge them to their Prepaid balance or Postpaid account.  Globe also offers mobile promos that give free connectivity to such content.
In 2014, Globe changed how Filipinos consumed music by introducing Spotify, ending the culture of illegally downloading mp3 music from illegal sources. Today, Globe remains as a preferred partner for content distribution by global, regional, and local entertainment brands and now produces its own original content through Globe Studios.
To learn more about Globe’s sustainability efforts, visit https://www.globe.com.ph/about-us/sustainability.html#gref
Tech