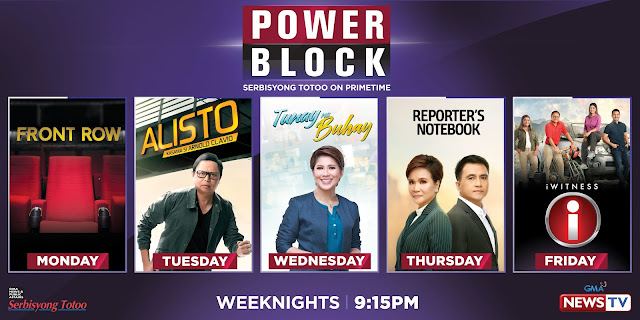 Kicking-off the line-up of eye-opening shows is documentary program Front Row. Airing every Monday, Front Row features stories told from a first-person point of view, a departure from the usual host-driven documentaries usually seen on television.
On Tuesdays, GMA News and Public Affairs pillar Arnold Clavio leads the public service show, Alisto. It features stories from actual videos of people faced with life-threatening situations as well as the latest modus operandi and stories on crime and safety. Promoting safety, the show aims to remind viewers to be always alert.
Meanwhile, airing on Wednesday is Tunay na Buhay hosted by award-winning broadcast journalist Pia Arcangel. The show celebrates the triumphs of the human spirit through the inspiring stories of people from all walks of life.
Taking the Thursday slot is investigative program, Reporter’s Notebook, hosted by veteran journalists Maki Pulido and Jun Veneracion. Over the years, Reporter’s Notebook has brought significant issues to the attention of the public, with many stories given more attention by the authorities after being tackled on the show.
Rounding off the line-up of Power Block is the country’s longest-running documentary program I-Witness. Every Friday, I-Witness hosts — led by GMA News and Public Affairs pillar Howie Severino, Sandra Aguinaldo, Atom Araullo and Kara David — share life-changing stories through the documentary format. Each documentary features Filipino values, culture, current events, and the human condition.
Catch Serbisyong Totoo on primetime with “Power Block”, Monday to Friday starting July 20, after “New Normal: The Survival Guide” on GMA News TV.
News & Events