This May 1, exciting adventures await Kapuso viewers as the bearer of the powers of an enchanted eagle sets off on a journey to protect the environment and to battle evil forces on GMA Network's action-packed fantasy drama series, 'Agimat ng Agila.'

The original series is the television comeback of well-loved and versatile actor Senator Ramon “Bong” Revilla, Jr. as Major Gabriel Labrador, the valiant head of Task Force Kalikasan who is wrongfully accused of his family’s death and is chosen as the bearer of the Agimat ng Agila.

With the recent celebration of Earth Day, Agimat ng Agila heralds on every Filipino’s guardianship of the environment and promotes how pivotal it is when a man embraces his love for his one and only planet.

Following his five-year-long hiatus from acting, Bong shares that he is both glad and blessed to be doing what he loves again, "Acting is an integral part of my life, and I owe who I am today to the industry. Hindi ko talaga maiiwan ang industriya. Na-miss ko rin 'yung camaraderie and 'yung collective creativity with my co-workers – from co-actors to the writers, the directors, the crew, and the staff. All in all, na-miss ko 'yung buong experience, and I am blessed to be doing it again."

Completing the powerhouse cast are Sanya Lopez as Maya Lagman, the headstrong but compassionate adopted daughter of Nanay Berta; Elizabeth Oropesa as Nanay Berta, the reclusive and mysterious elderly woman who will assist Gabriel on his journey as the tagapagligtas; Roi Vinzon as Alejandro Dominguez, a respected and feared businessman and crime lord; Benjie Paras as Sgt. Wesley Dimanahan, Gabriel's trusted confidant and right-hand man; Allen Dizon as Capt. Gerry Flores, second-in-command of the task force; Michelle Dee as Serpenta, an evil shadow creature who acts as an oracle for Alejandro; EA Guzman as Julian, an earnest man who secretly fancies his childhood friend Maya; Miggs Cuaderno as Bidoy, a smart-aleck who eventually becomes close to Gabriel; Ian Ignacio as Malvar, deputy henchman of Alejandro.

The series also features the special participation of Sheryl Cruz as Dr. Myrna Labrador, the soft-spoken and ethereal wife of Gabriel.

Playing equally vital roles in the series are King Gutierrez as Timon, acting head of Alejandro's henchmen; Jhong Cuenca as Mulong, the enchanted eagle that is actually an engkanto cursed to be a bird; Mike Lloren as Lt. Col. Roman Abdilla, the unsupportive commander of Task Force Kalikasan who heavily dislikes Gabriel. 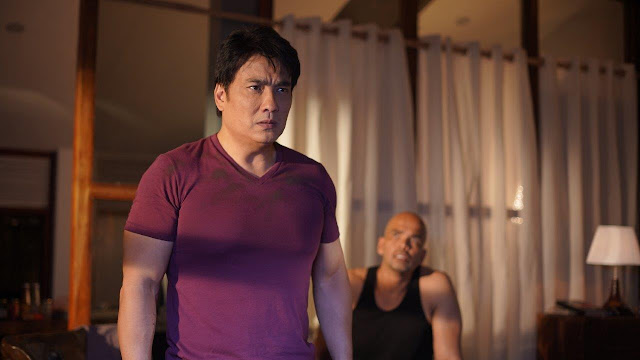 After accepting a military assignment in Task Force Kalikasan, Major Gabriel Labrador (Bong) and his wife, Myrna (Sheryl), decide to settle down in the idyllic town of San Jacinta where they plan to raise their son Wacky (Yuan). Together with his faithful sergeant Wes (Benjie) and deputy Capt. Gerry (Allen), Gabriel eventually becomes an integral part of the community for his commendable actions to protect the forest and wildlife.

Unbeknownst to Gabriel, his efforts have incurred the ire of Alejandro Dominguez (Roi Vinzon), a local crime lord who maintains the persona of a well-respected and philanthropic businessman.

Fortunately for Gabriel, an enchanted eagle has witnessed his heroism and has chosen him as the new 'tagapagligtas' to help save and protect the environment. The eagle sets him off on a journey aided by the mysterious but motherly Nanay Berta (Elizabeth), and her headstrong adopted daughter Maya (Sanya).

When Alejandro puts a hit on Gabriel and his family, the eagle swoops in to save his life which leads to him being the recipient of its 'bertud.' Gabriel has now been granted the abilities of the enchanted eagle. However, his arch-nemesis Alejandro is also allied with a wicked shadow whisperer named Serpenta (Michelle).

Now armed with the Agimat ng Agila, will Gabriel be able to balance his thirst for revenge with his sense of righteousness in battling the evil forces of Alejandro?

Catch the world premiere of Agimat ng Agila - under the helm of acclaimed director Rico Gutierrez - beginning May 1, Saturdays, 7:15pm, on GMA-7.