GMA Network announced it has strengthened its anti-piracy capabilities by partnering with the Alliance for Creativity & Entertainment (ACE).

Widely regarded as the world’s largest and most effective anti-piracy coalition, ACE currently has over 50 global members, with GMA as its first member from the Philippines. 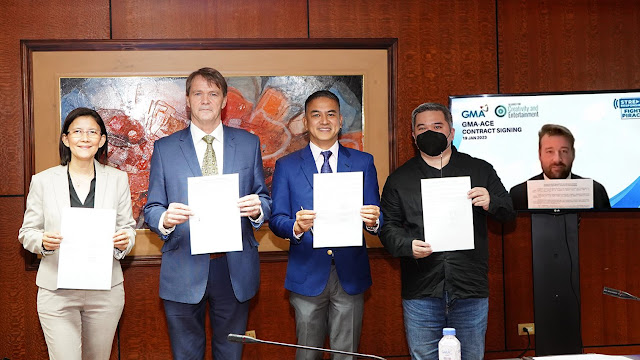 Representing ACE during the signing ceremony were Mr. Jan van Voorn, Executive Vice President and Chief of Global Content Protection for the Motion Picture Association (MPA) and Head of ACE, and Mr. Neil Gane, who represents ACE operations for the Asia Pacific region.

“Piracy continues to be one of the biggest problems in the entertainment industry globally,” said GMA Network CEO and Chairman Atty. Felipe L. Gozon. “The duplication and illegal distribution of movies, teleseryes, music, and other materials invalidate the hard work of those behind it. And as such, we are proud to join the Alliance for Creativity and Entertainment in its global campaign against digital piracy. GMA Network, through various initiatives on different platforms, is consistently taking the necessary steps to combat the illegal distribution of our shows movies, music, and other materials. And through our partnership with ACE, we look to further strengthen these initiatives to protect our content.”

“We are thrilled to welcome GMA Network to the Alliance for Creativity and Entertainment and look forward to working with them to combat piracy and protect content creators – in the Philippines and around the world. ACE is building a strong global network of media companies and partners who are working together to eradicate the serious threat piracy poses to the creative economy,” shared van Voorn.

As part of its efforts to combat piracy, GMA Network also launched last Thursday its own anti-piracy advocacy campaign dubbed “Stream Responsibly. Fight Piracy.” The campaign aims to encourage people, especially the younger generation, to be aware of what is right and wrong and help raise awareness of the value of creative works. It also aims to protect and educate the public about the potential harms of clicking pirated websites and apps.

Fittingly, these initiatives will not only ensure the protection of Filipino content creators but will also ensure the high-quality viewing experience of all Kapuso viewers and subscribers.

In 2023, GMA Network is all set to bring the biggest and grandest roster of shows.  These also include cutting-edge primetime shows such as “Voltes V: Legacy” “Mga Lihim ni Urduja,” “Luv Is: Caught In His Arms,” “Luv Is: Love at First Read,” “Hearts on Ice,”  “Lady Boxer,” “Love Before Sunrise,” “Royal Blood,” and “Love, Die, Repeat.”