Chef Shahab Hesni: Cooking Up a Storm at Seda Atria

Seda Atria recently introduced its Executive Sous Chef in an intimate lunch with media and bloggers. The man who is set to bring Seda’s culinary offerings to new heights is Chef Shahab “Boo” Hesni.

An Ilonggo, Chef Boo’s passion for cooking was kindled at an early age when he got intrigued by his mother’s colourful cookbooks and his grandmother’s expertise in cooking continental cuisine. As he grows older, he was further exposed to a world of flavours and exciting culinary ventures. 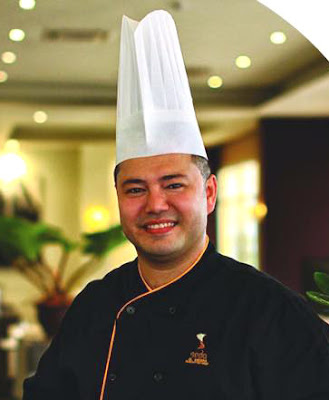 He was introduced to the hospitality business when he worked in one of the popular hotels here in Iloilo. Assigned in F&B Service Management, he became knowledgeable on the intricacies of the food business.

His passion for food was further fueled when he was introduced to the art of food tasting as well as with his frequent interactions with colleagues regarding menu development. It was the turning point in his life. It was during this time when he fully realized that his heart belongs nowhere else but in the kitchen.

After 8 years of working in different outlets and juggling his way up the culinary ladder, Chef Boo decided to bring his craft to higher levels. He took a full course under a reputable culinary academy in Metro Manila where he graduated top in Professional Culinary Arts with an Award of Distinction. From then on, there was no stopping his culinary journey towards excellence.

He further honed his craft when he was introduced to various international cuisines during his stint at the Rixos Bab Al Bahr, a prestigious five star hotel resort in the United Arab Emirates. In 2014, he brought his expertise and new learnings home when he returned to the Philippines and worked in a medium-sized hotel in Quezon City.

In 2016, Seda Hotel asked him to join its culinary team as Executive Sous Chef of Seda Atria in Iloilo. Loving his hometown and wanting Ilonggos to taste his culinary creations, Chef Boo did not hesitate to accept the offer.

Today, Chef Boo is the new guy at Seda Atria’s kitchen, breathing fresh ideas and whipping innovative dishes as well as giving his personal touch to the many scrumptious food offerings of the hotel.

Here are some of Chef Boo’s creations that tickled our palate during the press lunch. All foods served are consistent of “Southeast meets West” and the perfect blending of flavours made one wonderful gastronomic experience for us that day.