Metro Pacific Investments Corporation (MPIC), through its operating companies and with the support of various businesses led by Manuel V. Pangilinan, launched its GABAY Advocacies that aimed to champion a sustainable Philippines through a two-hour digital concert featuring the country’s top OPM artists last July 14.

“I’d like to thank everyone who brought this concert to reality. This day wouldn’t really be complete without saying thank you to all of you. I really had a long list of people to thank--too long. I wish when the pandemic settles down, we would be able to hold a live concert and we would be inviting all the artists because I think we really need a break from the pandemic and our Filipino artists are really great,” said Manny V. Pangilinan, chairman of MPIC and PLDT.

But beyond the stellar performances remain the heart of the GABAY message--that the Philippines deserves the brightest future. The concert also served as the stage to present the six Gabay Advocacies and the various initiatives and milestones it has accomplished and how the MVP Group, guided by the advocacies, remains committed to its mission to serve as reliable partners for nation-building and uplifting Filipino lives. 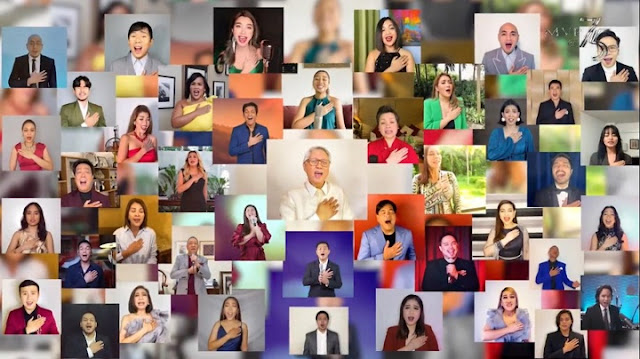 “The Gabay Advocacies were born out of our Chairman MVP’s passion to make a difference.  With his guidance and leadership, we are committed to help shape a healthy and hopeful future for our country. We will continue to leverage our group’s strengths to become part of the solution to our country’s challenges.”” said Jose Ma. K. Lim, Metro Pacific Investments Corporation President.

Each Gabay Advocacy was created to respond to the call for individuals and organizations to contribute to the country’s achievement of the UN’s Sustainable Development Goals (SDGs). They were presented by advocacy anchors: celebrity power couple Sarah Geronimo and Matteo Guidicelli for Gabay Kabuhayan, actor Ian Veneracion for Gabay Kabataan, actor Derek Ramsay for Gabay Kalikasan, host and anchor Korina Sanchez-Roxas for Gabay Komunidad, actress Mikee Cojuangco-Jaworski for Gabay Kalusugan, and singer/actress Pops Fernandez for Gabay Karunungan.

The presentations of the advocacies and its milestones were underscored by medleys sung by seasoned and up-and-coming Filipino artists--Bugoy Drilon joined Quest, Mark Bautista, and Erik Santos in singing a medley of “Nais Ko,” “Sige Lang,” and “Simulan Mo” for Gabay Kabuhayan focused on uplifting the lives of Filipino entrepreneurs through livelihood programs, trainings, and other initiatives; Aicelle Santos and Morisette alongside Christian Bautista and Sam Concepcion sang “Both Sides Now,” “Here Comes the Sun,” “A Million Dreams,” and “Firework” for Gabay Kabataan focused in providing tools for the youth to imagine and pursue the grandest vision of their future.

Aicelle Santos, Ogie Alcasid, Darren Espanto, and the CompanY sang “What a Wonderful World,” “Going Back to the Earth,” “Earth Song,” and “Mercy, Mercy Me” for Gabay Kalikasan, an advocacy where the organization aims to become catalysts for a cleaner, greener, and more resilient planet for every Filipino by protecting and nurturing vital ecosystems and habitats including Laguna de Bay and the Caimpugan Peatlands in Agusan Marsh.

Morisette, Vivoree, Klarisse de Guzman, and Bituin Escalante performed a powerful medley of “Fight Song,” “Hero,” “Rewrite the Stars,” and “Rise Up” for Gabay Komunidad and Gabay Kalusugan. The two advocacies centered on not staying silent during crises and providing every Filipino access to healthcare and wellness through the introduction of mWell, an integrated healthcare platform that provides needed healthcare access with a few clicks. It also highlighted the group’s efforts in becoming a reliable partner of the government throughout the pandemic.

Meanwhile, mother-child tandems Regine Velasquez-Alcasid and Nate, Zsa Zsa Padilla and Karylle, Lea Salonga and Nicole, and Pops Fernandez and Robin, performed a heartwarming rendition of “Never Enough,” “Thanks to You,” “Believing in Me,” and “You Raise Me Up” to honor teachers and students at the core of Gabay Karunungan which embodies the whole organization’s belief that good education helps contribute to national development and improve the lives of Filipinos. Through its flagship Gabay Guro program, the organization created initiatives that helped lead the way to digitizing schools and universities and provided facilities and tools for both teachers and students.

Throughout the night, viewers were also treated to performances from OPM greats Nonoy Zuniga, Kuh Ledesma, Basil Valdes, Geneva Cruz, and Ryan Cayabyab who sang OPM classics “Kailan,” “Araw-Gabi,” “Magbalik Ka na Mahal” and “Kay Ganda ng Ating Musika.” Talented singers including Angeline Quinto, Lara Maige, Jona, Lani Misalucha, and Poppert Bernadas took to the same stage to sing a medley of Barbra Streisand and Barry Manilow hits including “Somewhere,” “Finally Found Someone,” “Dream a Little Dream of Me,” and “I Won’t be the One to Let Go.”

Perhaps the most heartfelt segment of the concert is the tribute to MVP from those whose lives he has changed for the better. For Gabay Kalikasan, Marine Scientist and Zoologist Dr. Jurgenne Primavera spoke of how MPIC established the Mangrove Propagation and Information Center in 2018 for coastal and fisheries protection.

Metro Pacific Tollways is currently constructing the 8.5-kilometer Cebu Cordova Link Expressway in the same area and made sure that they minimized the impact to the mangrove ecosystem even if it meant that they had to make the bridge longer.

For Gabay Kabuhayan, we heard from fisherfolk whose livelihood was preserved because of easier access to areas with abundant marine life. In support of Gabay Komunidad and Gabay Kabuhayan, far-flung communities were powered through Meralco’s electrification program; less privileged areas were given access to potable water through Samahang Tubig Maynilad; and Smart Retailers were enabled to have stable sources of income.

Olympic weightlifter Hidilyn Diaz spoke of the tremendous support she received from the MVP Sports Foundation while Elly Jan Nituda of the Philippine Sepak Takraw Team recalled how MVP himself was instrumental in his successful journey.

PLDT Home also sponsored the uniforms of the Sepak Takraw National Team. For Gabay Karunungan, we heard the inspiring story of Carolyn Bongato, a Gabay Guro Scholar, who was given the opportunity to reach her dreams and is now doing her part in the shaping the future through her students.

These beautiful stories were accompanied by the soulful renditions of Gary Valenciano, Martin Nievera, Lea Salonga, and Regine Velasquez of the songs “You,” “I’ll Be There (For You),” “Ikaw,” and “How Did You Know,” proving why they are some of the country’s best singers.

The empowering and heartwarming night concluded with a powerful rendition of “Bayan Ko,” “Impossible Dream,” “O Bayan Ko,” and “Lupang Hinirang,”.  Chaye Cabal-Revilla, MPIC Chief Finance Officer and Chief Sustainability Officer said “Our Finale number showcased MVP’s journey through the years, making what was thought to be impossible, a reality for our country.

This is the dream of a humble Filipino to make his country better. And he invites all of us to be a part of this collective effort to continue to fortify this endeavor through the 6 Gabay Advocacies for a Sustainable Philippines.”